Ferkins publishes The Light in My Darkness 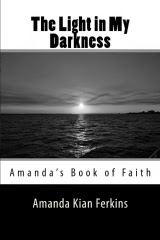 Burns Flat has one of the world’s longest runways (OK, everybody knows that),  has produced famous musicians, sent men to spread God’s word in Africa, Mexico, Central America, and Honduras, and If you throw in the suburb of Dill City, then add India to the list of countries to whom we have sent missionaries.

That’s not bad for an almost drove through it and didn’t notice town in western Oklahoma.
But there is more.  Now Burns Flat is home to a poet--a published poet no less.

Mandy Ferkins has joined the ranks of published authors with her own collections of poems titled The Light in My Darkness.  It is available for sale online now.  Mandy will hold a book signing soon, probably in June 2015.

Order you copy now if you can’t wait until June.